Posted by Helen Potter on 31 August 2017 | Filed under Pain, Physiotherapy

Ankle sprains are one of the most common musculoskeletal and sports-related injuries, constituting nearly 25% of all musculoskeletal trauma cases and almost 40% of all sports-related trauma cases.[1] 40%-50% of these case have reported having long term residual symptoms with almost 20% of acute ankle sprains developing chronic ankle instability. [2] Individuals with chronic instability often report recurrent sprains and ‘giving-way’ sensation at the ankle joint = Functional Ankle Instability (FAI). [3]

Several clinical tests can be used to assess FAI and the respective ligament involved in the acute sprain or chronic instability.

Relevant Anatomy – Ligaments of the ankle

The lateral side of the ankle has three supporting ligaments: the anterior talofibular (ATFL), the posterior talofibular (PTFL) and the calcaneofibular (CFL). The three ligaments are together called the Lateral Collateral Ligament Complex. The ATFL resists torsion and inversion stresses in a plantar flexed foot. It is the weakest and hence the most commonly injured part of the Lateral Collateral Ligament Complex. [1]

CFL is an extra-articular component of the complex. Its function is to resist torsion and inversion stresses in a dorsi-flexed foot. The PTFL resists posterior movement of the talus. It is the strongest and least injured part of the complex. Injuries to PTFL usually occur in severe ankle sprains which also involve the ATFL and CFL.[4] 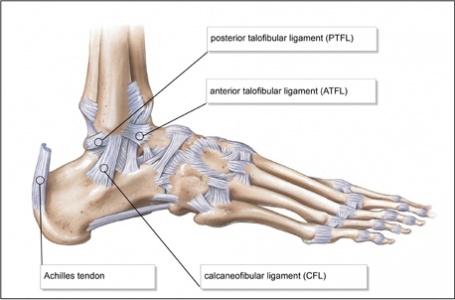 The deltoid ligament is the only ligamentous complex stabilizing the medial side of the ankle. It is composed of superficial and deep layers. ‘

The deep layer has greater contribution to the stability of the ankle.[1] The deltoid ligament as a whole has a dual function of providing stability to the talo-tibial joint as well as transferring forces between tibia and tarsus. It fixates the tibia above the talus and restricts the talus from shifting into a valgus position, translating antero-laterally or rotating externally.[5]

The medial side of the ankle is considerably stronger than the lateral side. Injury to the medial ankle may even lead to fracture of the medial malleolus without a significant sprain to the deltoid ligament.[1] 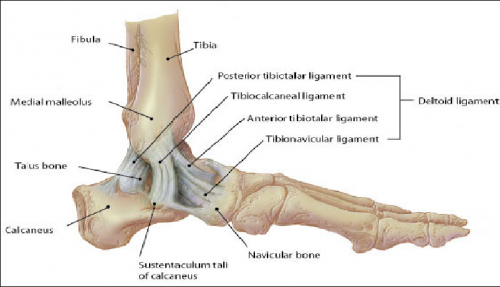 1. Anterior Drawer Test[4]  is used to assess the integrity of the ATFL based on the anterior translation of the talus under the tibia in a sagittal plane.

3. Eversion stress test[1] assesses the integrity of the deltoid ligament and is also know as the Eversion Talar Tilt test.